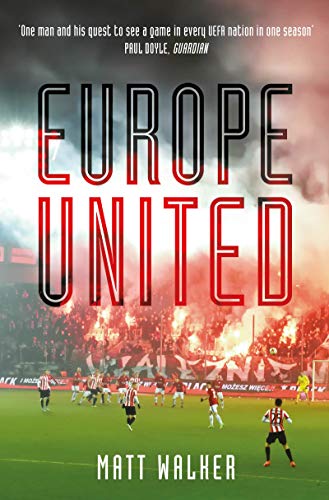 Críticas Fascinating . . . a culturally savvy look at football across the continent. * FourFourTwo * Informative and eye-opening . . . an inspirational and motivational book. -- footballbookreviews.com Excellent and thoroughly enjoyable. * Sunday Sport * Reseña del editor AS SEEN ON BBC FOOTBALL FOCUS AND BT SPORT 'Excellent and thoroughly enjoyable' Sunday Sport 'One man and his quest to see a game in every UEFA nation in one season' Paul Doyle, Guardian EUROPE UNITED follows Matt Walker's unprecedented challenge to experience top-division football in all 55 UEFA countries in a single season. In June 2017, Matt said farewell to his job, surrendered his Fulham FC season ticket and set off for Georgia, the first stop on his mission. He would end his adventure eleven months later in Montenegro, having conquered the continent and captured the imagination of its sporting media. His epic journey would pose its challenges. Yet no amount of airport confusion in Iceland, unusual betting activity in Latvia, spectator bans in Albania, disturbances in Kosovo or ropey breakfast buffets in Moldova would make Matt miss a matchday. And then there were the games themselves: showcasing the full spectrum of footballing theatre, from the truly sublime to the utterly ridiculous. Matt's trip would also bequeath him footballing wisdom beyond his imagination. Not only would he learn that Liechtenstein had its very own 'golden generation', but also why one football club in Gibraltar is benefitting from a television gameshow, who in La Liga's mascot is a giant anchovy, how Tony Adams fared in his managerial spell in Azerbaijan, and just what Bosko Balaban is up to these days. This is the story of one fan on a once-in-a-lifetime experience: travelling to Europe's unseen corners, talking with its unsung supporters, and tracing the beautiful game across the breadth of our brilliant, bizarre continent. Ver Descripción del producto