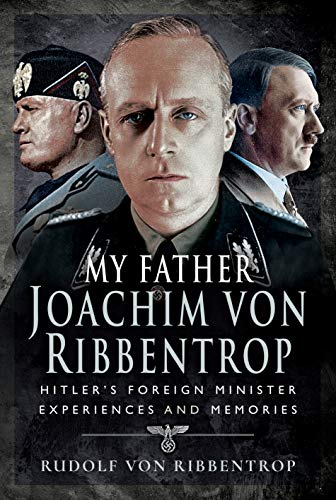 Reseña del editor On 16 October 1946 Joachim von Ribbentrop, Hitler's wartime Foreign Minister, was executed at Nuremberg, convicted on four counts including deliberately planning a war of aggression and war crimes. In this first English Language edition of his memoirs, Rudolf von Ribbentrop frankly describes his relationship with his father when he was the german Ambassador in London and during the war years. Von Ribbentrop was an often isolated figure among the Nazi elite. In his final report from London von Ribbentrop informed Hitler that he was convinced that Great Britain would fight for its position in the world. He went on to play a key role forging the short-lived Pact with Stalin's Soviet Union. Far from being uncritical, the Author, now in his 90s, sets out to paint an objective picture of his Father's role. His unique position throws fascinating light on the unfolding dramatic events leading up to, and then the execution of, the Second World war. While the Author briefly describes his personal experiences including his war service with the SS, it is the insight this work provides into top level decision - making at the heart of the Third Reich that will appeal most to both historians and laymen. Biografía del autor RUDOLF VON RIBBENTROP, born on 11 May 1921, is the son of Joachim von Ribbentrop. He spent a year at Westminster School, London while his father was Ambassador to the Court of St James in the 1930's. Rudolf served with distinction throughout the Second World War. He was wounded for the first time during the 1940 Western Campaign. Commissioned in 1941, he served in Finland and at the retreat from Kharkov, with 1st Leibstandarte SS Adolf Hitler, he took part in the famous battle of Prokhorovka on 12 July 1943 before transferring to 12th SS Panzer Division Hitlerjugend with whom he fought in France. He rose to command I./SS-Panzer Regiment 12 before surrendering to the Americans on 8 May 1945\. He was wounded five times and his bravery awards included two Iron Crosses (First and Second Class), the German Cross in Gold, the Finnish Freedom Cross, the Knight's Cross of the Iron Cross and the Wound Badge in Gold. His memoir/biography of his father was first published in German in 2008 (Meine Vater Joachim von Ribbentrop - Erlebnisse und Erinnerungen) and later translated into Russian and French. This is the first English language edition.